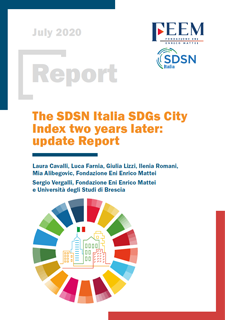 After two years from the publication of the SDSN Italia SDGs City Index (FEEM 2018), the following Report presents data updated to 2020 as the Italian capitals of provinces are concerned, proposing a comparison of them, where possible and subjected to appropriate methodological considerations, after two years.

By now the consideration of local territories, whether they are cities, provinces or regions, as fundamental in the achievement of the 17 Sustainable Development Goals defined in the 2030 Agenda of the United Nations, represents a shared belief. The Agenda, unanimously approved in 2015 by 193 countries, represents a policy plan of action with 17 Goals (SDGs), 169 targets and more than 230 elementary indicators, designed to meet the global challenges of our time.

In order to respond to the needs of the signatory countries and to adapt to their territorial, social and economic characteristics, from the very beginning the UN member states were asked to draft their own National Strategy for Sustainable Development, which in Italy was presented to the Council of Ministers on October 2, 2017 and was approved by the Interministerial Committee for Economic Plannin (CIPE) on December 22, 2017. Considering the heterogeneity of our peninsula, to which not by chance we usually refer as “geography of economic and social determinants”, one single strategy, in order to be effective, is not enough; for this reason, it is important that all the Regions, and with them also their Provinces and Cities, establish their own planning agenda to be implemented and monitored over time.

In order to support local administrators along this journey, but also to increase awareness of civil societies on the sustainability level of their territories, Fondazione Eni Enrico Mattei first elaborated an index to measure the distance to targets of Italian municipalities-capitals of provinces (Cavalli and Farnia, 2018 , then an interregional comparison able to derive the relevant regional placement, with respect to the average of all Italian regions, on each one of the 16 out of 17 Sustainable Development Goals (Cavalli et al., 2019) and finally a tool useful to Italian provinces and metropolitan areas (Cavalli et al., 2020).

Going forward in the process of measuring and monitoring local sustainability in Italy, Fondazione Eni undertook the promise of providing an update, every two years, of the above-mentioned tools, whether data are available and a comparison among them appropriate, in order to inform civil societies and local institutions on which are the milestones and the issues still affecting their territories.

The present Report aims at providing a screenshot of the sustainability levels of Italian municipalities-capitals of provinces, on the basis of the 2018 SDSN Italia SDGs City Index, thus sharing its methodology as well as the final objective of the analysis, and underlying similarities and differences of the data gathered and the results presented from 2018 to date only if the elementary indicators are actually comparable.