This year’s launch event of the SDG Index and Dashboards Report took place under heavy police protection at the G20 summit in Hamburg on July 7. Aart De Geus chairman of the board at Bertesmann Stiftung and Jeffrey Sachs, special advisor to the UN secretary-general on sustainable development and director of the UN Sustainable Development Solutions Network, presented the major findings of this year’s report to experts in the field and representatives of the press.

Two years after leaders from 193 countries signed the Agenda 2030 and committed themselves to implement the Sustainable Development Goals (SDGs), growing nationalism and protectionism is increasingly taking its toll on international cooperation. In this context this year‘s report, with the title “Global Responsibilities: International spillovers in achieving the goals”, was presented at the G20 summit in Hamburg. The launch event was overshadowed by riots from protesters, but benefitted from the strong security around the venue, the same hotel where French President Emmanuel Macron was staying at the time.

The SDG Index and Dashboards Report is produced annually by the Bertelsmann Foundation and the Sustainable Development Solutions Network. The report shows where countries stand with regard to achieving the SDGs, and highlights where the signatory states have to increase their action. This year’s report particularly emphasizes the role of spillover effects and the resulting special responsibilities of high-income countries. 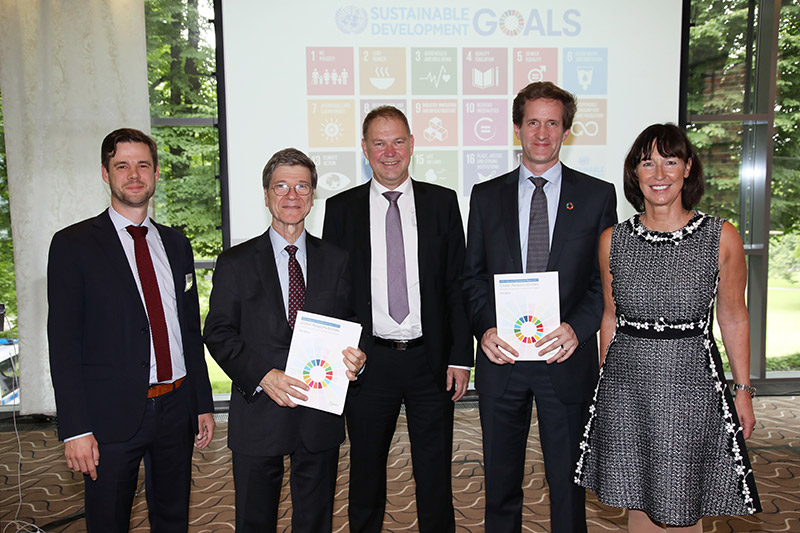 Jeffrey Sachs and Aart De Geus presented the report, followed by a lively discussion of the findings by experts and representatives of the press. The key message to heads of states, who were gathering right next door for their first summit meeting, was that the leading high-income countries have to live up to their responsibility and recommit to the comprehensive implementation of the Agenda 2030.

In his keynote speech Aart De Geus emphasized the important role of the G20 countries and summarized the key messages from the report. He warned that the recent surge in populism and unilateralism rather leads to 1930 than to fulfilling the 2030 Agenda. An important lesson from the report according to Mr. De Geus is that all countries still face major challenges in achieving the SDGs on time. Spillover effects increase those challenges, particularly actions by rich countries affect other countries’ ability to achieve the SDGs.

Low-income countries therefore need the support from rich countries. This assistance should come in many forms: foreign direct investment, global tax reform to enable the poor countries to fight tax evasion by international investors, technology sharing, capacity development, and of course, more Official Development Assistance. Aart De Geus also emphasized that countries should benchmark themselves against their peers as well as against the goal thresholds to identify their individual need for action.

Jeffrey Sachs underlined the special importance of monitoring tools like the SDG Index in achieving the Agenda 2030. He explained that the SDGs were achievable, which is demonstrated by the Scandinavian countries. But the difficulty of successful implementation lies in the economic and political order in many other industrialized nations, which is not conducive to sustainable development yet. According to him examples of countries like the United States, which comes in 42nd place in the SDG Index, show that wealth doesn’t necessarily translate to sustainability. Next to wealth it is also important to be fair and to be green, only then can sustainability be achieved.

The following discussion first focused on some technical details of the report and the rankings of specific countries and regions. Professor Sachs explained that the low ratings of many African countries stem from historically difficult situations, but that technological innovations and increasing digitalization bear great opportunities for African countries to close the development gap. Participants were also interested in the future of the SDG Index and discussed a proposal to create a similar ranking for international corporations to help them get on board with sustainable development.

The launch event in Hamburg was organized by our partners from the Global Perspectives Initiative. A second event will take place at the High Level Political Forum of Sustainable Development at the German Embassy to the United Nations in mid-July, where the report will be discussed as part of the official agenda of the meeting.