Launch of the SDG Index & Dashboard 2017 in Spain

During the presentation, former Minister of Foreign Affairs Miguel Ángel Moratinos, Chair of REDS, highlighted the progress made both globally and in Spain and “that all agents have worked satisfactorily: universities, business, civil society, and governments – especially the local and autonomous. Still, there is yet a long way to go.” 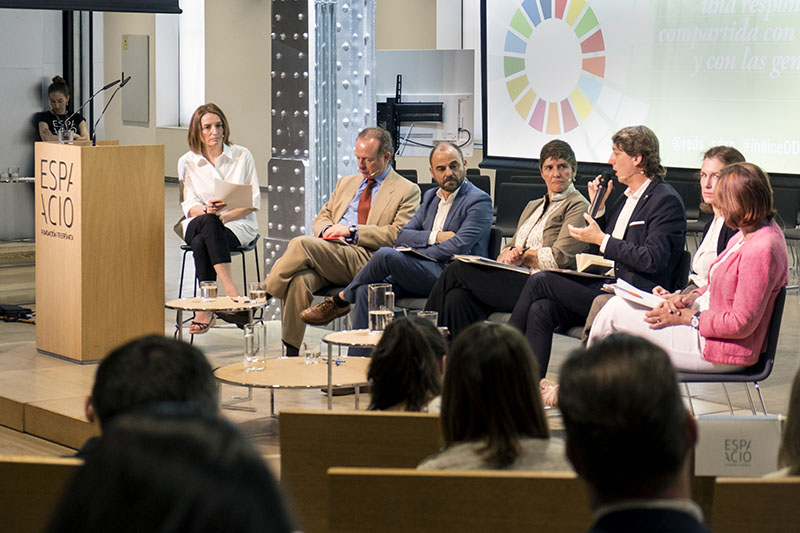 “The sustainability agenda offers a different path: of well-being, of justice, of peace, of solidarity.” To make these goals a priority, Moratinos called for “the SDGs to be at the center of Spanish foreign action.”

Javier Benayas, professor at the Autonomous University of Madrid (UAM), provided a detailed analysis of the SDG Index and Dashboards 2017 and explained the challenges presented at both the policy level and the level of statistical analysis and data collection to develop the indicators. In this edition of the report, a total of 157 countries have been analyzed – eight more than in the previous edition – and 20 new indicators have been incorporated – 83 in total – that allow measuring in more detail the scope of each one of the objectives.

In addition, for the first time, the Index has included so-called “spillover effect” indicators that assess the influence of countries’ policies and actions on the ability of others to achieve the SDGs. Thus, the report shows data showing how a large number of industrialized countries are not only getting poor results for themselves, but the collateral effects of their decisions are hampering the implementation of ODS in poorer countries. “Generating development in some countries causing underdevelopment in others is not the desired effect of the sustainability agenda,” Benayas criticized during the presentation.

This is a great innovation because many of these data tend to be overlooked or barely measured in official statistics. For SDSN this shows that certain elements of the current development model – for example, high levels of consumption, the existence of tax havens or the export of arms – cause adverse side effects and are mainly caused by high-income countries.

Carlos López Blanco, director of Public Affairs and Regulation at Telefónica, also highlighted the importance of sustainability to “ensure a more equitable and environmentally sustainable development”. A challenge for which “the commitment of all the actors involved: public entities, governments, civil society and the private sector” is urgently necessary.

Together with the overall analysis, the SDG Index developed by SDSN provides country pages detailing the degree of compliance with each of the indicators that determine progress. This allows qualifying each target with a color code, depending on a selection of indicators. The degree of SDG achievement is valued with green, yellow, orange or red, with green being “best” and red “worst”.

Spain, scoring 25th on this years’ ranking, does not score “green” in any of the 17 goals. Its dashboard is filled with six “red”, six “orange” and five “yellow”. Among the SDGs with the worst results for Spain are several related to the conservation of the environment, including those dedicated to the sea and biodiversity, or greenhouse gas emissions.

In this sense, data on the decline in Official Development Aid, the poor performance of greenhouse gas emissions or the lack of an active strategy for the protection of the ocean, affect Spain’s results within the global comparison.

Towards multilateralism and cooperation

Following the presentation of the SDG Index & Dashboards 2017 was a panel discussion themed “Progress in the implementation of the Agenda 2030 in Spain” with the participation of Luis Tejada, director of the Spanish Agency for International Cooperation and Development (AECID); Leyre Madariaga, Director of External Relations of the Basque Government; Carlos Martínez, Vice-President of United Cities and Local Governments (UCLG) and mayor of Soria; José Luis Martínez, deputy and spokesman for Climate Change of the Citizens Group; Maite Pacheco, director of children’s awareness and policies, UNICEF Spain; and Mariluz Castilla, member of the Spanish Green Growth Group (GECV). All of them stressed the importance of aligning government programs with the Agenda 2030 seeking global action, as well as mainstreaming policies. “We are facing a clear change of development model”, said Carlos Martínez. “As long as the current situation in Africa, Latin America or some Asian countries persists, we all ‘score red’ on the SDGs”, he concluded.

The session was closed by Teresa Ribera, director of IDDRI and chair of the REDS Advisory Board, for whom the SDGs are “an opportunity for social dialogue and participation”. In this sense, the commitment of countries to implemented”. For Ribera “we cannot talk about economic recovery if we do not manage to integrate the Agenda 2030; there is no possibility of business development, nor is there any possibility of social coexistence and stability without a commitment to the SDGs.”